There was a range of views amongst the Shadow Board members on what the Reserve Bank of New Zealand should do with the Official Cash Rate (OCR) over the coming year. However, the majority view was that a 50 basis points OCR increase in the August meeting is warranted, with only two members recommending a different quantum of tightening (25 basis points and 75 basis points each). Shadow Board members highlighted the strong inflation pressures in the New Zealand economy as justification for their recommendation for further tightening over the coming year.

Regarding where the OCR should be in a year, Shadow Board members’ views ranged from 3 percent to 4.25 percent. Inflation is the main concern, with the disagreement centring on the amount of tightening required to bring inflation back to the Reserve Bank’s 1 to 3 percent inflation target band. Some members noted the risks of a hard landing for the economy from a sharp rise in interest rates. Signs of slowing in parts of the New Zealand economy highlight the balancing act faced by the Reserve Bank in controlling inflation in the current supply-constrained environment. 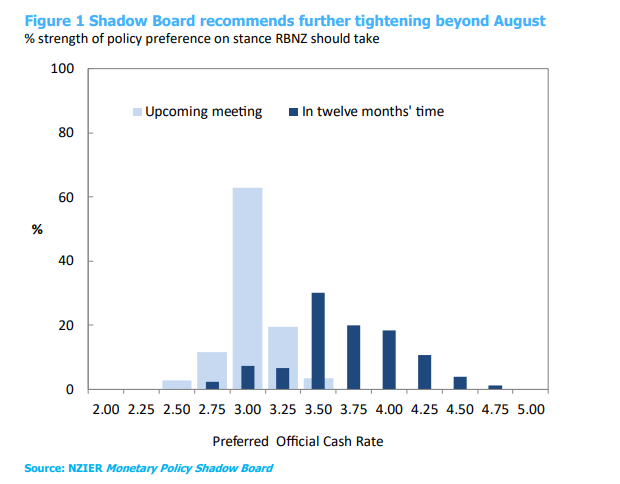 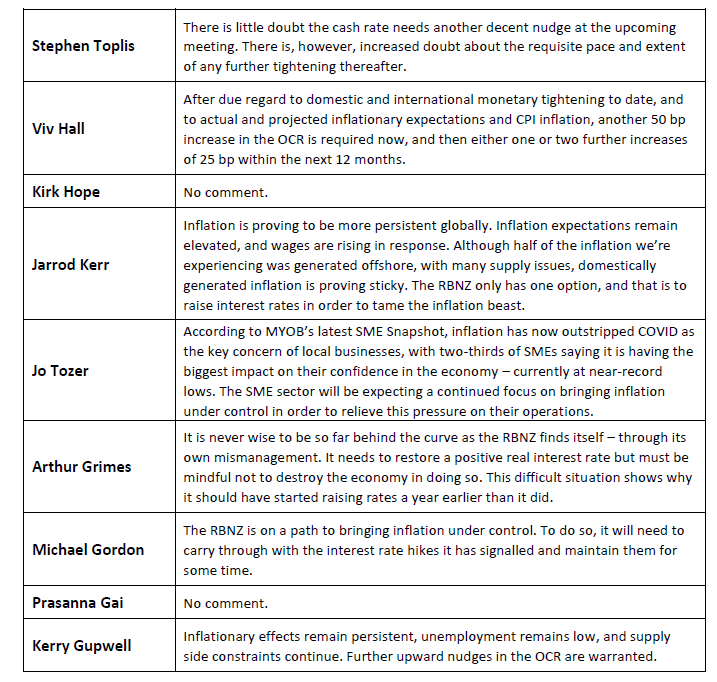 NZIER’s Monetary Policy Shadow Board is independent of the Reserve Bank of New Zealand. Individuals’ views are their own, not those of their respective organisations. The next Shadow Board release will be Monday, 3 October 2022, ahead of the RBNZ’s Monetary Policy Review. Past releases are available from the NZIER website: www.nzier.org.nz

Shadow Board participants put a percentage preference on each policy action. Combined, the average of these preferences forms a Shadow Board view ahead of each monetary policy decision.

Shadow Board calls for substantial tightening over the coming year

Shadow Board calls for substantial tightening over the coming year

February 21, 2022 4 min read
Shadow Board is divided over whether the RBNZ should hike by 50bp

April 11, 2022 3 min read
Shadow Board members differ in views on the extent of interest rate increases