The latest NZIER Quarterly Survey of Business Opinion (QSBO) suggests that businesses are still feeling downbeat in the September quarter, but they are also starting to see the light at the end of the tunnel. On a seasonally adjusted basis, a net 42 percent of businesses surveyed expect deterioration in general economic conditions over the coming months – a considerable decrease from the 62 percent in the June quarter.

Regarding demand in firms’ own business, a net 3 percent reported an increase in their own trading activity over the September quarter. Demand looks to be stabilising at a lower level, suggesting a period of weaker growth in the New Zealand economy ahead.

There are some signs of easing capacity pressures in the New Zealand economy. A net 9 percent of businesses reported capacity as the primary constraint on their business – compared to 13 percent in the previous quarter. Capacity utilisation for builders and manufacturers eased slightly in the September quarter, albeit still sitting at historically high levels. A breakdown of the results shows capacity pressures were particularly acute for the building sector and amongst exporters.

Labour remains the top primary constraint for businesses, with the proportion reporting finding labour as their primary business constraint increased from 37 percent to 43 percent. However, shortages for both skilled and unskilled labour are easing from the historically high levels of the past year. This suggests wage growth is likely to ease over the coming year, as the reopening of international borders allows more firms to employ workers from overseas.

These developments are flowing through to moderation in inflation pressures. In the September quarter, the proportions of businesses reporting higher costs and raising prices both fell. Although the economic outlook is highly uncertain, these results support our view that annual CPI inflation will ease over the coming year.

Businesses are still cautious about investing in buildings and plant and machinery for the coming year, with a net 17 percent and a net 2 percent intending to reduce investment in these areas, respectively.

Retailers are the most downbeat

The retail sector is the most downbeat of the sectors surveyed. A net 61 percent of retailers expect a worsening in general economic conditions over the coming months. Both demand and staff numbers have reduced. The sector still faces intense cost pressures, with 95 percent of retailers experiencing higher costs in the September quarter. Meanwhile, only 70 percent were able to increase their prices.

Previously the most downbeat part of the economy, the services sector saw an improvement in its sentiment. Nonetheless, a net 37 percent of services sector firms expect worsening general economic conditions and profitability in the sector deteriorated. Services activity has picked up, with international tourists boosting demand for hospitality and accommodation as international borders have reopened. The decline in COVID-19 infections has also reduced disruptions to services activity.

Sentiment in the building sector is also improving, but a net 57 percent of the firms surveyed still expect a deterioration in general economic conditions. Costs have intensified in the sector while demand has softened, with an increased proportion of building sector firms reporting sales as their primary business constraint. The proportion of building sector firms reporting labour as their top primary constraint fell to 43 percent. We expect the reopening of the borders to allow further easing in labour shortages in the sector as firms can bring workers overseas.

The architect’s measure of work in their own office points to a weakening in the housing and commercial construction work pipeline, but Government construction work remains positive. Although residential construction looks solid over the coming months due to the high number of dwelling consent issuance, we expect this to weaken as lower house prices discourage developers from bringing new housing stock into the market. 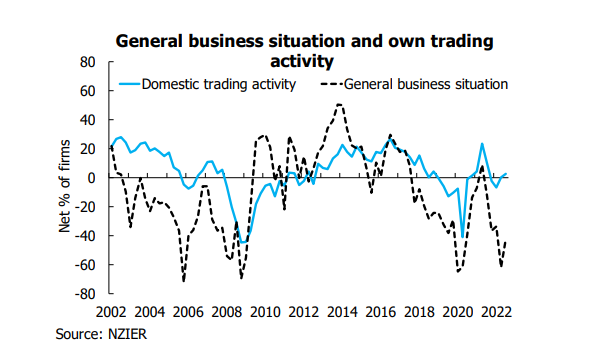 Background
The New Zealand Institute of Economic Research has conducted its Quarterly Survey of Business Opinion since 1961. It is New Zealand’s longest-running business opinion survey. Each quarter we ask around 4,300 firms about whether business conditions will deteriorate, stay the same, or improve. The responses yield information about business trends much faster than official statistics and act as valuable leading indicators about the future state of the New Zealand economy. Long-term series derived from the survey are held at the NZIER and are available to NZIER members via our website at www.nzier.org.nz.